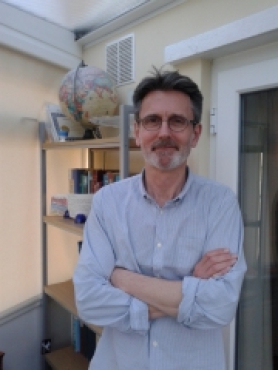 I am a lecturer in English language and applied linguistics in the School of Languages and Applied Linguistics. Prior to becoming an academic, I was an English language teacher and, for the great majority of that time, I specialised in training non-native executives in business English and communication skills both in the UK and on in-company tailored courses abroad. This practical experience stimulated an academic interest in language and, more specifically, second language acquisition. I pursued this interest by doing a part-time Masters degree in Applied Linguistics when in my thirties. A decade or so later, in 2004, I started tutoring part-time at the Open University in addition to my main job, eventually becoming a central academic in 2012.  I completed my PhD (again, part-time) through the OU at the beginning of 2014.

My long teaching experience has made me appreciate the importance of classroom dynamics in contributing to successful learning outcomes. It was clear to me from early in my teaching career that humour is an important ingredient in creating a cohesive and engaged group of learners. Wanting to find out more about the multiple social functions of humour and play in the language classroom was my original impetus for doing a PhD. My thesis focused on the ways in which low proficiency adult English language learners use spontaneous humorous language play to project their own identities, manage their learning environment, take ownership of the target language and incrementally build an in-group culture. They are often able to achieve this despite lacking a shared first language or many common cultural reference points with their fellow learners. My work draws on Bakhtin’s ideas about the heteroglossic and dialogical nature of language along with Goffman’s concept of frame. My research shows how in-group humorous reference points are seeded, develop and become part of a collective identity.

The thesis has formed the basis for a monograph Spontaneous Play in The Language Classroom, published in 2019. This also extends my doctoral work by looking beyond learner behaviour to investigate the role of teachers in allowing, facilitating or, indeed, discouraging spontaneous play in the classroom. A chapter in an edited collection on language play – Building rapport and a sense of communal identity through play in a second language classroom – was published in 2017. This traces how an initially insignificant classroom exchange becomes the basis for a series of playful episodes that develop over a couple of days to become part of the group’s humorous repertoire. I am currently broadening the contexts in which I explore the forms and functions of humour to include academic conferences and online meetings.

I have been involved in the production of a number of modules in my own faculty and beyond:

·         I have written units and chapters for the undergraduate first-level modules Exploring languages and cultures and Introducing English Languages Studies, the third-level module Language and creativity and the MA module Applied linguistics and the English language. I am currently part of the production team working on a second-level module replacement for Worlds of English (see below).

·         I have created supporting material for various modules. These include study skills material for Language and creativity and language support materials for non-native English speakers studying on the undergraduate module My digital life and the pre-MBA module English communication skills for global managers.

·         I have edited or co-edited books for both Language and creativity and Exploring languages and cultures.

·         I have been involved in designing the assessment materials for the first-level undergraduate module Voices and texts, its successor Voices, texts and material culture, the second-level undergraduate course Worlds of English and for Language and creativity.

I chair the second-level module U214 Worlds of English which involves various duties such as overseeing the smooth running of the module over the academic year and managing the assessment and exam award processes. I am keen to increase the visibility of the central academic team for those studying on the module. With this in mind, I have, for example, implemented a monthly screencast/podcast to students over the course of the year.

I have been involved in various scholarship projects at the OU. I recently led a faculty-funded project on Worlds of English, investigating how students engage with the language description element of the module and how best we might support those who struggle with it.

I have tutored a number of modules at undergraduate level, including The art of English from its first presentation in 2006 to 2014, its predecessor E300 English language and literacy, and English grammar in context. It was, in part, the focus in The art of English on everyday creativity which encouraged me to pursue my research interest in humour.

I recently co-supervised a PhD student, Claire Acevedo who successfully obtained her doctorate at the beginning of 2020. Claire used a Systemic Functional Linguistics framework in order to investigate the efficacy of a particular language awareness training programme on the classroom practices of secondary school teachers.

I was an academic consultant on a BBC World Service project which developed a ten-week online programme about distance learning first broadcast at the end of 2017.

I have been an External Examiner at the University of Hertfordshire, monitoring the academic standards of the institution’s assessment and award processes. I gave a talk to students and staff at the university about my research.

I hvae been involved in the London Centre for Languages and Cultures, a project involving the OU and Pembroke College, Oxford. The aim of the project is to encourage A-level students to pursue the study of languages and linguistics at university. The project sets up events providing students with lectures and seminars in order to give them a taste of study at HE level.

I am a member of the English Association’s University Transition SIG. The aim of the group is to foster communication between teaching colleagues in the post-16 and HE sectors. Although the OU’s student body is generally older, I think it is important to know what is happening in education at the crucial juncture between school and university. In this regard, I give an annual talk in a London school to A-level students who are considering studying English language and applied linguistics at university. In addition,

I have written various articles on different aspects of applied linguistics for the online magazine Emag which is aimed specifically at A-level English Language and Literature students.

A study of the playful use of English among learners on an intensive language course (2014-01)
Hann, David Everett
PhD thesis The Open University