Can we talk about End-of-life planning? 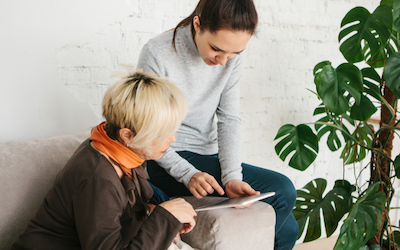 Dying may seem like a distant possibility, but a new BBC Ideas film, made in partnership with the OU, asks “Should everyone have an 'end-of-life' plan?“. Medical anthropologist Dr Erica Borgstrom, from the WELS School of Health, Wellbeing and Social Care, was academic consultant to the film which suggests questions to ask (or discuss with others), when drawing up an end-of-life plan, such as; ‘Do you want to come home to die?’, ‘Who is going to look after your animals?’ and ‘Where do you want your ashes scattered?’.

“If you feel fit and healthy, dying may seem like a distant possibility that is years off”, says Dr Borgstrom. You may not feel ready to answer all the questions suggested but the film stresses that making a start is important and, once you have, make sure you let your friends and family know where they can find the document. “You can revisit your plan and change it as your life is progressing or as your values are changing.”

Dr Borgstrom’s specialist area of research and teaching is death and dying, with an emphasis on end-of-life care. She believes that it’s increasingly important we put time aside to plan for end-of-life care with our loved ones. “More of us have a period where we are dying rather than just suddenly dead”, she says in the film. Other contributors point out that having an end-of-life plan puts that person at the centre of the plan and can be a comfort for the family of a dying person as they’re not left thinking, ‘What if we’ve done this wrong?’.

As Disabilities Campaigner Adil Ghani comments in the film, “Nobody is going to say, ‘Well, Adil didn’t say what he wanted’, because I did and it’s there on paper.”

“Should everyone have an ‘end-of-life’ plan?” is available to view here on BBC Ideas.

How to get started

To find out more about what is involved in an end-of-life plan and to make a start if you’re ready to, Dr Borgstrom has put together some guidelines in this OpenLearn article linked to the BBC Ideas film.

Dr Borgstrom is a key contributor to OU module K220 (Death, Dying and Bereavement) which is designed for those who want an awareness about end-of-life care, as well as outlining the skills and knowledge for health and social care professionals about providing end-of-life care. She is also lead academic for the OU Death, Dying and Bereavement Research Group, OU Thanatology.