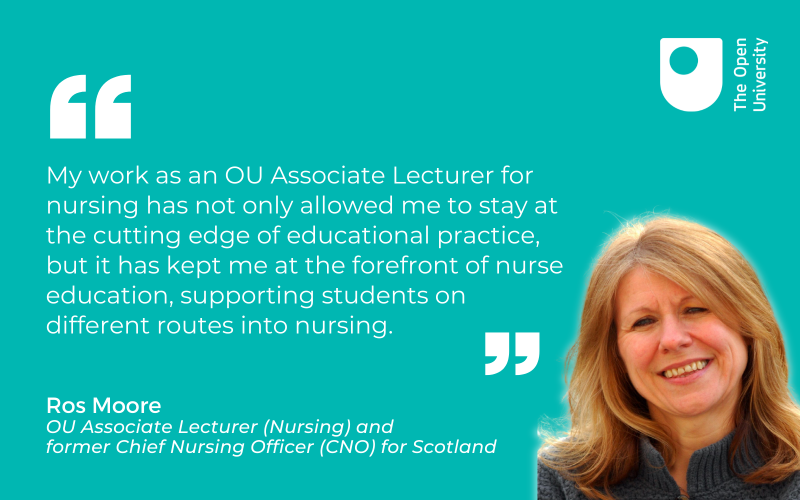 As we approach International Nurses’ Day, we spoke to Ros Moore, Associate Lecturer (also known as a Tutor) on our Nursing qualifications, and a former Chief Nursing Officer for Scotland about her career, and why she chose to move into Nursing education.

“Hello, my name is Ros Moore and since 2000 I have been an Associate Lecturer (AL) in HWSC, working on a range of undergraduate and post graduate nursing modules.

“Being an AL has never been my primary employment, and I have fulfilled the role alongside a series of senior nursing positions which have taken me from clinical practice in elderly medicine, paediatrics and surgery, to senior leadership posts in higher education and NHS organisations, and then to national roles at NHS Direct, Department of Health and NHS Connecting for Health. Latterly, I was privileged to hold the post of Chief Nursing Officer (CNO) for Scotland for five years. Since then, I have worked part-time as the Chief Executive of a national nursing charity and as a Board Director of an NHS Trust.

“I have often been asked (particularly when I was the CNO Scotland) what motivates me to continue working as an AL whilst working in such high profile and demanding roles? My response is that it is certainly wasn't the money or status, it was down to much more personal factors.

"My belief in the value of education as a liberating force"

“One of the factors driving my commitment to being an AL is my lifelong belief in the value of education as a liberating force for all people but particularly for women.  As a 'Yorkshire lass' from a relatively poor working-class background, I was conditioned by my family to believe that education was the passport to better things. Over the years, as I progressed along my educational journey, the wisdom of my high school motto 'Learn to be Free' became more and more clear; I found that my own education (which has included an MA with the OU) and the skills that I have developed as an AL, have equipped me with a foundation of knowledge and skills that has underpinned my work ever since and which continues to do so today. It is through my work as an AL that I continue to fulfil my own lifelong goal of 'learning to be free' and more importantly through OUs model of tutor supported distance learning, which I believe creates more independent confidence and competent nurses, I have hopefully helped others to do the same.

"Responsibility to develop the next generation of nurses"
“Another factor in the decision to be an AL relates to my professional identity as a registered nurse and the responsibility I believe I must develop the next generation of nurses. Initially this belief led me to me to work full time in nurse education during the early nineties, fulfilling a series of teaching and managerial roles in a traditional red brick university. Whilst I enjoyed many aspects of this work, I often felt stifled by academic bureaucracy, frustrated by the low value placed on the quality of teaching and student experience compared to research and felt conflicted by some of the attitudes and values that dominated the sector at that time. I therefore went back to the NHS intent on re-establishing my career in service whilst finding other ways to fulfil what I saw as my professional duty to education. This was when, attracted by the flexibility of the role and inspired by the OU’s history of widening access to higher education for students, I became an AL.

"Being an AL keeps me firmly grounded"

“During my time at government, I saw how easy it was for people like me to view the world from the 'hard high ground', described by Schon all those years ago, which can encourage a technical rational approach to policy leadership and management that fails to acknowledge or understand the complexities of day-to-day healthcare, or to value the experience of healthcare staff operating amidst the 'swampy lowlands' of patient care and practice. I have found that working with nursing students and keeping in touch with ups and downs of their world helped to mitigate this view.

"A desire to be at forefront of change"
“Another and final reason for remaining an AL has been the opportunity to be involved in the innovation and transformation that characterises the OU.  The desire to be at forefront of change has been a defining feature of my career and I have actively sought positions where I have been involved in large scale cultural change; examples go right back to the implementation of Project 2000 in the nineteen eighties, establishing NHS Direct in West Yorkshire and then across the UK and taking up the challenge of being the first Director of Nursing in Connecting for Health.

“My work as an AL has not only allowed me to stay at the cutting edge of educational practice more widely through the use educational technology and online teaching models, but it has also kept me at the forefront of nurse education so that today I am involved in the delivery of the Future Nurse Curriculum and am supporting students on different routes into nursing.”

Find out more about studying Nursing with the OU.

Find out more about becoming an Associate Lecturer with the OU.

See all current Associate Lecturer vacancies within the Faculty of WELS.