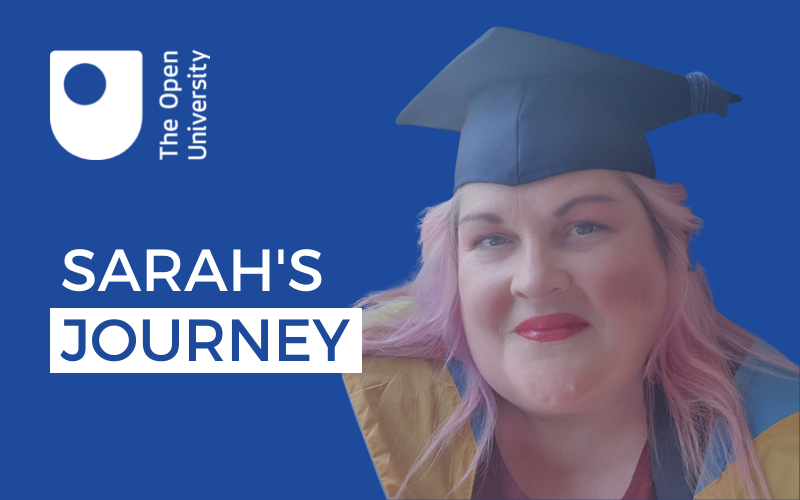 OU Students Association President, Sarah Jones, is currently studying for her Masters in Education with WELS. Here, she shares with us how studying with the OU has changed her life, built her confidence and allowed her to follow in her father’s footsteps.

Former WELS Faculty Student Representative, Sarah Jones knew about the OU long before she started studying with us. Her first memories of the OU date back to her youngest years, where OU programmes and science kits were all a part of growing up with her father, who was one of the OU’s very first students:

“When we were younger, my dad would record the OU programmes from the TV so we could watch them during the school holidays… The biggest thing I remember is when I was doing my GCSEs, he wanted to help me study, so he dug out all of his OU Maths stuff and said ‘There you go, if you can do that, you can do your GCSEs’. So, I actually looked at Maths papers from his degree and it was a big help!”

Sarah’s dad, Nigel began his OU degree in the early ‘70s. Sarah says her father spoke of his studies with ‘a lot of passion and fondness’ throughout his life, even keeping his OU science kits on display and showing them to his children while sharing stories of his study days.

Following in her father’s footsteps

It was her father’s passion that inspired Sarah’s first career dreams of becoming a doctor, though sadly it wasn’t meant to be, as she explains:

“That dream of being a doctor was taken away from me when I was diagnosed with ME (Myalgic Encephalomyelitis, also known as CFS - Chronic Fatigue Syndrome) at 13. I ended up being off school for about six months and I spent a long time doing part-time schooling. That was a massive challenge as schools back then weren’t as good at providing extra support.”

It wasn’t until years later that Sarah began to re-evaluate her future after the tragic loss of her first husband.  Sarah attempted to rebuild her life while battling her illness:

“After meeting my partner Dave, we moved to Bristol and I started thinking of what I really wanted to do, and I got a job as a youth worker. We then had our two monsters and I suffered post-natal depression which put paid to everything.

“All these horrible things had happened and when [the children] went to school I realised I needed to pull myself together and do something! My dad had been an Open University student when we were tiny... I always wanted to go back and do a degree and I thought ‘If my dad could do it with small children, I can do this too’.”

It was a decision that would completely change Sarah’s life.

Finding WELS and a new confidence

Sarah began her undergraduate Primary Education degree with WELS in 2017 and admits her low confidence made her want to initially ‘hide behind a computer screen!’; though anyone who knows Sarah will know that didn’t last very long…

“I signed up for my Education degree with the OU and did it in three years. I got involved with the Students Association straight away and found a community of people who were all from different walks of life but had studying in common. I was Sarah there, I wasn’t somebody’s daughter, somebody’s sister or their mum or wife. I was Sarah and that was lovely. I’ve got so much from being an OU student, it’s given me my confidence back.”

After working as the WELS Student Representative throughout her undergraduate degree, Sarah became President of the OU Students Association in 2020, the same year she graduated. It’s an accomplishment she would never have dreamed of when she first started her studies.

Sarah is now completing her Masters in Education, still within the Faculty of WELS, and hopes she can continue her work in creating positive change for learners of all ages:

“I’m doing a Masters in Education now and although it’s exceedingly hard work, I am loving learning and the more that I learn, the more I want to see a change in the world. Originally when I started my studies I wanted to go into a classroom and teach children but now, I want to effect policy and effect change for young people.

“Four years ago, I would never have had the confidence to be Students Association President. [Studying with WELS] has given me the confidence that I can go and speak at the highest level, I can have a voice and my voice matters! I represent more people than my local MP does, and I feel I can go and talk to people in government and say, ‘We need to make things better for our students’.

“I wouldn’t have had the opportunity to build my confidence or grow as a person if I wasn’t studying [with WELS]. The OU is opening massive doors for me. It’s giving me the confidence to do things I’ve always wanted to do that I never knew I wanted to do!”

Though her father passed away before Sarah enrolled with the OU, she believes he would be proud of all that she's achieved:

“I think he would be quite proud of where I’ve got to and I think he would understand the challenges of working full time and studying too. Though I bet he would say, ‘Sarah, I can’t believe you’re not studying anything to do with science!’”

Sarah’s advice for other students

“My advice for students or anyone thinking of studying would be to jump in with both feet! Go for it, it’s absolutely the best thing you could possibly do. Challenging yourself is great for personal growth, I couldn’t recommend studying enough to be honest. It’s hard work but anything that is worth doing is hard work.”

You can keep up to date with Sarah via her weekly President’s Blog on The Hoot, the magazine site for OU students.

Read more of Sarah’s story on the OU Alumni website.