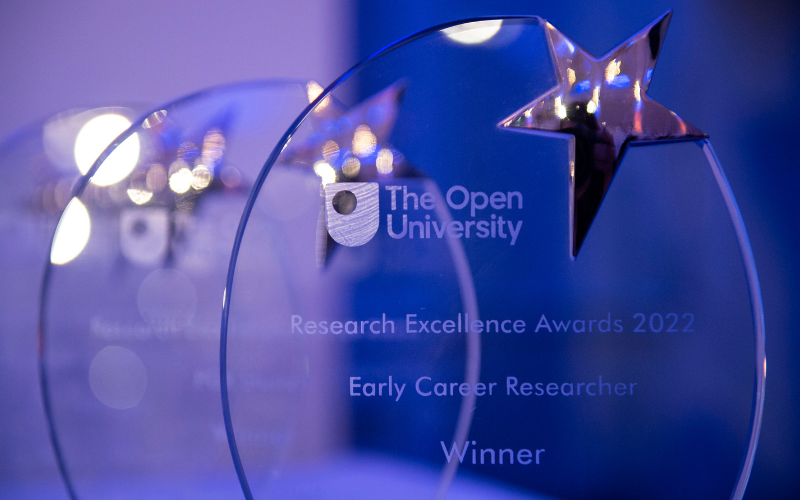 Now in its third year, the Research Excellence Awards celebrates and recognises the achievement of research at The Open University (OU). This year, guests gathered in London to recognise the outstanding contributions made by researchers. Researchers at the Faculty of Wellbeing, Education and Languages (WELS) were no exception, walking away with awards on the night. Among the winners was Dr Erica Seruset Borgstrom winning the Early Career Researcher award for her research into death and dying.

The Early Career Researcher Award recognises the outstanding research talent of an OU researcher who is within five years of completing their doctorate. The nominations for this award were evaluated across two criteria, whether they made a significant contribution to the field of research appropriate to their career stage and whether they demonstrate a positive contribution to the research environment.

Erica holds a PhD from Cambridge and a BA from Durham University. For the past few years, Erica has studied the context around death and dying, influencing policy and practice in the United Kingdom and abroad. She is a medical anthropologist and senior lecturer at the OU and is the lead for Open Thanatology, an interdisciplinary research group which educates on death and dying.

She has most recently worked with NHS England and Marie Curie, focusing on understanding how people interpret and use the Ambitions Framework for Palliative and End of Life Care. Erica has contributed heavily to the OU module Death Dying and Bereavement (K220) which looks at the social context of death and dying, using real life examples to enable students to think critically about the practice and impact of end of life care and support.

Of her win, Erica said, “winning the Early Career Researcher award is recognition of the work I’ve done to date and the contributions I am making to the field. I’m particularly pleased to see The Open University valuing research in this area, that of death and dying-related topics, and it offers hope for future projects and collaborations.”

Attendees of the Awards said that the night was “great to get together and celebrate” and a brilliant opportunity to get “talking to new people.” Erica agreed stating, “My highlight of the event was watching the short films screened about the winners, researchers, and projects. It made the diversity of OU research very tangible and made me excited to be part of a university housing such great work and fostering talent across disciplines.”

Find out more about Erica and her research in the video below: