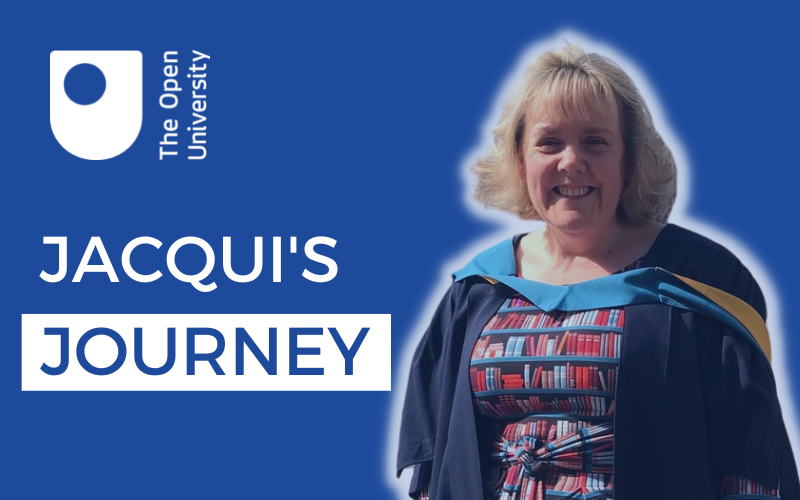 OU students face many life challenges throughout their studies, and for School of Languages and Applied Linguistics (LAL) graduate Jacqui Ross hers came in the form of the menopause. She tells us how she navigated her way through the transition, as well as about her award-winning voluntary work and plans for what to study next.

“I went to a brick university back in the 80s but didn’t enjoy it at all and dropped out. My parents quite rightly told me I’d better go and get a job! I joined the civil service and was an officer of HM Customs and Excise and HMRC for nearly 30 years. I worked my way up through the ranks and eventually became a deputy director. As a senior civil servant, I managed lots of people who were doing Open University degrees. I always had massive admiration for them because often they had children and were studying for a degree while holding down a full-time job. Then I got ill with stress and a heart condition, and suddenly at 48 I was retired. I thought ‘This could be the time. I can complete what I’d failed to finish all those years ago’. So I decided to study languages with the OU. I took French and German because I’d always been quite good at languages and that’s what I’d been studying at university when I dropped out.

Testing the water with OpenLearn

“Before I enrolled, I had a look at some of the free French modules on OpenLearn to give me an idea of what the material would be like, and to help me decide which level of OU course to start with, because it had been more than 30 years since I’d done A-Levels. It was helpful to see what OU teaching materials looked like, because the courses on OpenLearn are very similar to the actual materials you use when you sign up to study. OpenLearn is great because even if you aren’t going to sign up to do a degree, there’s enough there to help you learn some language for a holiday.

“I think the OU’s open-entry policy is excellent because throughout my studies I’ve met lots of people who wouldn’t have got into a brick university. I believe having no barriers to entry enriches the group of people you’re studying with, in that they are so different and come from such different backgrounds. I’ve made friends with people I may never have met socially or through work because we would have moved in different circles. I think that inclusive element of the OU is brilliant.” 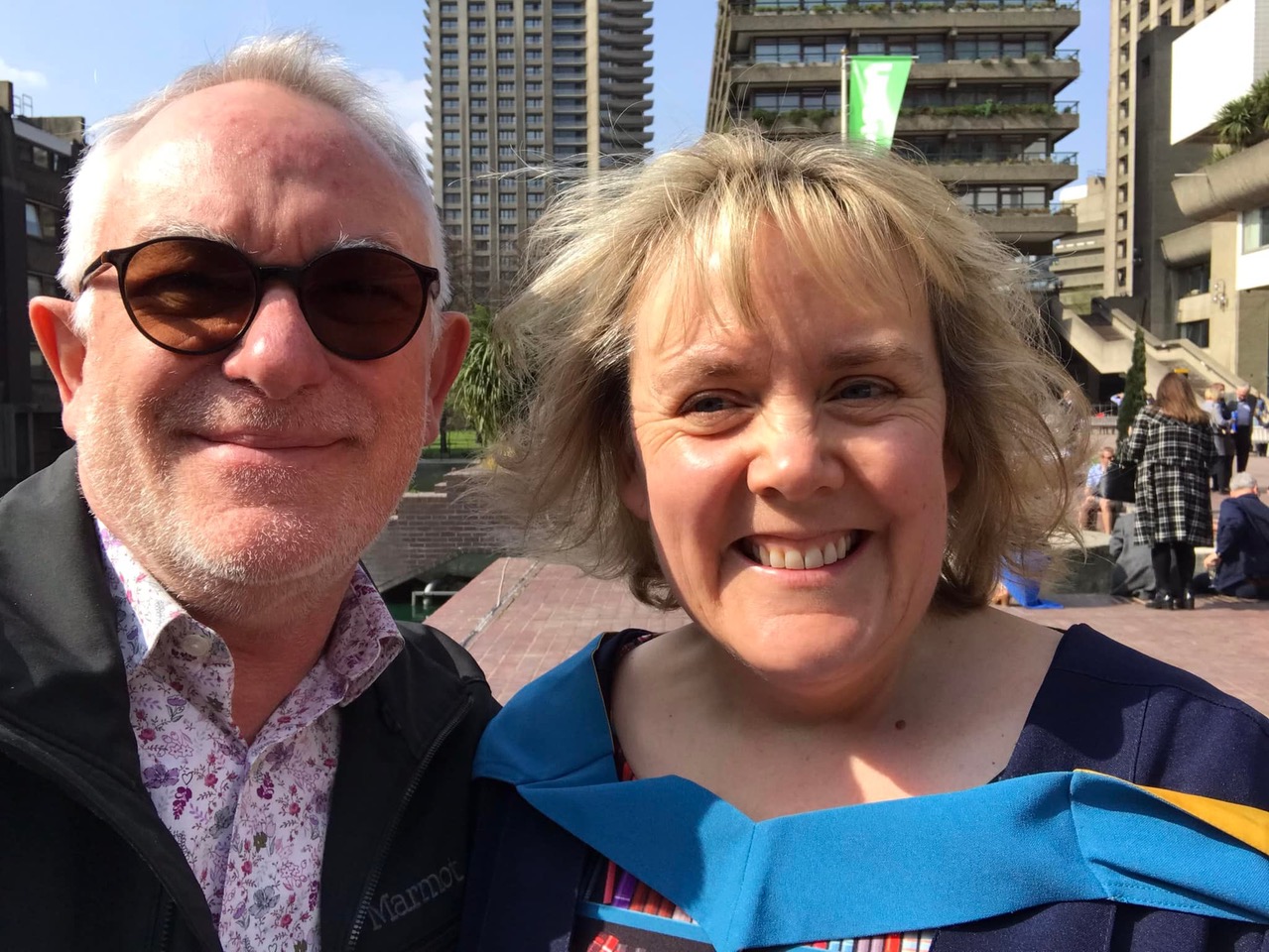 Becoming an inspiration to others

“My husband, who didn’t want to go to university when he left school, is now halfway through an OU degree because he saw me study. I said to him ‘The Tutors are just fabulous, they’re so patient. Particularly with languages’. At first he said ‘I’m too old’ and I said ‘There are people at these graduation ceremonies in their late 70s. You’re not too old. Get on with it’. He’s now doing an open degree mixing German with other subjects. He wants to do some Art History and Spanish modules. I’ve no idea how the Language Tutors do it, but even if you’re just beginning and you don’t speak any of the language, they get you from nothing to being actually quite confident in a year.”

“When you get to a certain age you can feel ‘Oh, I’m probably done with learning, my mind is probably not as sharp as it used to be’, and women of a certain age talk about brain fog associated with the menopause. I’m not ashamed to say I went through that. I thought ‘I can’t study – I can’t even do a shopping list’. But to anyone who is considering studying with the OU, I am living proof that you absolutely can learn and get through the brain fog!

“Menopause symptoms are more talked about now, but if they had been when I was ill at work I probably wouldn’t have retired when I did. Part of the reason why I became so stressed and ill was because of what was happening to me because of my age. Now I’m coming out the other side of it with an OU degree, I realise that there’s absolutely nothing wrong with me at all. The OU gave me a purpose again, something to get out of bed for. It gave me my confidence back. I’m definitely not ready to stop living – I’m ready to carry on.”

Award-winning work for the next gen of students 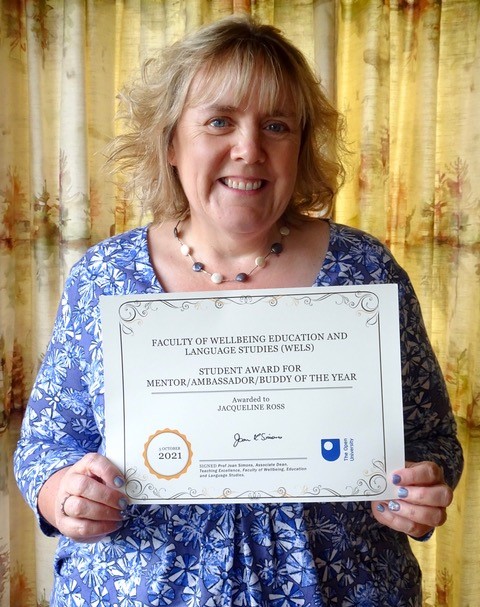 “I’ve been an OU Student Buddy with LAL since they introduced them, and I’m still one now. I suppose the thing I’ve done as a Student Buddy that I’m most proud of is to offer live, practice-conversation sessions. At the end of Level 1, Languages students have a live assessment with their Tutor, which is the first time they are assessed on live speaking (prior to this, they submit voice recordings). This causes stress for some, because you have a six-minute conversation that is hard to prepare for because you don’t know exactly what you’ll be asked. I asked the School whether I could stretch what the Student Buddy can do and offer practice sessions where I ask the students questions to give them a feel of what the real thing is like. As a response to my work, I was given a Buddy of the Year award.”

Dancing to a different beat

“I feel sad I won’t still be studying with the OU now I’ve completed my course, so I want to start a new course. I teach the piano, so I think I’m going to do an OU Masters in Music. I’ve always loved music and wanted to go to music college. So the OU is now giving me another opportunity to follow through an ambition I failed to follow through all those years ago.”

Be inspired by more graduate stories on the OU Alumni website.