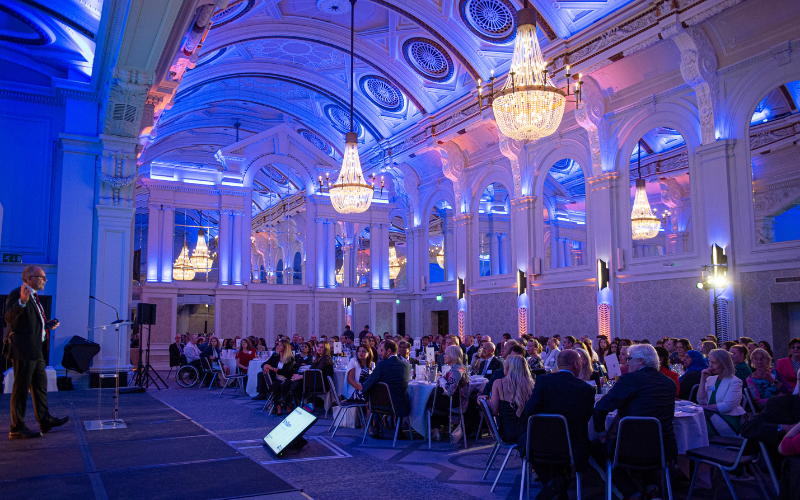 Researchers at the Faculty of Wellbeing, Education and Language Studies (WELS) walked away as winners and runners-up in multiple categories at The Open University’s third Research Excellence Awards. Held last week, the awards celebrate and recognise the outstanding achievement of the university’s research environment.

Amongst the winners announced last night were WELS researchers Dr Erica Seruset Borgstrom, winning the Early Career Researcher award category for her work in death and dying, and Dr Philippa Waterhouse for her win in the Postgraduate Research Supervisor award category which acknowledged the empathy and support she has given to students.

Nearly 140 nominations in 12 categories were received, with the winners announced at a ceremony at the Connaught Rooms in the heart of London. The awards recognise outstanding contributions to OU research, which the Research Excellence Framework has externally assessed as ‘world-leading’ or ‘internationally excellent’.

The judges were looking for nominations which fulfilled relevant criteria, including whether they made significant and positive contributions in their field of research or whether they have enhanced the postgraduate researcher experience at the university.

In response to their wins, Dr Erica Seruset Borgstrom said, “My highlight of the event was watching the short films screened about the winners, researchers, and projects. It made the diversity of OU research very tangible and made me excited to be part of a university housing such great work and fostering talent across disciplines. I’m particularly pleased to see the OU valuing research in my area, that of death and dying-related topics.”

Dr Philippa Waterhouse said, “Doctoral supervision is a really rewarding and exciting aspect of my job – getting to see something grow from an initial idea into a rigorous and in-depth research project, and also at the same time also getting to see your students grow in their confidence, expertise and skills. It is great to know that the work that you are doing is making a difference to your students.”

Further congratulations go to all WELS researchers who were nominated for the awards. In addition to the winners, the department was awarded runner-up in several categories. Dr Ayomide Oluseye was runner-up for the Postgraduate Research Faculty Prize for her work in sexual and reproductive health for marginalised women and girls. Dr Azumah Dennis was runner-up for the Outstanding Impact of Research on OU Teaching, Curriculum or Students award. Professor Sarah Earle and Dr Maddie Blackburn were runner ups for the Outstanding Impact on Society and Prosperity award. Dr Amber Fensham-Smith was the runner up for the COVID-19 award.

In addition to the awards, a brand-new category debuted this year called the People’s Choice Award where four of the OU’s most impactful projects have been put to a public vote. Projects led by WELS researchers are included in the nominations:

There is still time to vote in the People’s Choice category, votes stay open until Monday 3 October with the winners announced shortly after.