Using Our Story with older people

Our Story has been used with older people to provide a way of capturing memories and personal histories. Pamela Dunne from St. Joseph's Centre, Clonsilla, Dublin provides a summary of this work, and this is followed by a project run by Dr. Valerie Critten and Professor Natalia Kucircova.

In 2015 Pamela Dunne, a Clinical Nurse Specialist in Dementia, and her colleagues piloted the Our Story app to create a digital life story with a lady in her mid-fifties who has Down syndrome. This lady loved using the Our Story app and having no prior experience in the use of IPad technology she was supported to create several chapters in her life story, her childhood, family and friends, special achievements, holidays etc. A quote from this lady on using the Our Story app “It helps me to keep my memories”. Following the pilot study 11 people were chosen along the spectrums from cognitively well (no dementia), early stage dementia, mid stage dementia and advanced dementia plus from a mild to a moderate and severe intellectual disability and ranging in ages from mid-forties to eighty years of age, to observe how people were using the Our Story app. The observed use informed a staff training program on the use of digital life story work to support personalised care.

The Our Story app was made the app of choice as it facilitated the person to create a bespoke personal digital life story encompassing photos, pictures, text, audio and videos. A key feature of the app is the open-ended design with no restriction on pictures, length of audio or video recording. This lends to personalised chapters that make the life story intrinsically meaningful to the individual.

The digital life story project has continued to grow and there are now approximately 80 digital life stories in place. These are across a spectrum from some having people having a couple of chapters to others having 20 plus chapters. Some people with mild to moderate ID use the technology independently. Most use the technology with support from family/staff or volunteers.

Digital Life Story has a value for everyone but most especially those with communication difficulties and those at risk of losing the treasured moments of their life as they age.

Pamela Dunne CNSp, RNID, MSc, has 35 years of experience working with children and adults with an intellectual disability (ID) in a variety of roles ranging from teaching, social and recreational to nursing, in Dublin, Ireland. In her current role as a Clinical Nurse Specialist (CNSp) in dementia in intellectual disability she works closely with people with an ID, their families, the multi-disciplinary team and support staff in providing a comprehensive service offering baseline screening, dementia assessment and diagnosis and follow up care and supports for those diagnosed with dementia.

Pamela’s research interests include aging well with an intellectual disability and psycho-social approaches to care. Pamela has led out on an award-winning project, ‘Creating Digital Life Stories using iPad technology’ in the Daughters of Charity Disability Support Service. This project won the Dementia Elevator award in 2015 and was a finalist in the Irish Healthcare Centre Awards in 2018.

Our Story has been used in a similar way as part of an applied research project to create digitalised personalised stories with people who have dementia by Dr Valerie Critten and Professor Natalia Kucircova. Dr Critten provides a summary of this work.

A club for people with dementia or memory problems. The club was for 10-12 people with a diagnosis of dementia or similar which met every Monday from 10.00-3.00, and was co-ordinated by a leader, a deputy and a number of volunteers. A local Housing Association helped to fund and co-ordinate this club and several others in the area. Three of the club members agreed to take part in the activities.

Each of the three club members chose the subject and content of their own stories, all were mainly based on memories from their teenage years/ early twenties.

After initial interviews with the club staff and volunteers, it was decided that Dr. Valerie Critten would introduce herself to the club members and explain about creating stories on the iPad. Everyone took turns to learn how to use an iPad, taking photos and viewing them on the screen. Valerie visited the club over seven weeks, helping with activities, and working individually with the three club members. There were four main sessions with each club member as follows:

Session 1: Using the camera on the iPad and becoming familiar with taking photographs and changing from the camera mode to viewing the photos, as well as swiping across the screens.

Session 2: Beginning the story. Select and order photos on the app.

Session 4: Sharing printed booklets with other club members and family.

Initially it was quite difficult for the club members to start their stories, and to focus on particular memories that they wanted to talk about. As one of them said, ‘You don’t always want to remember’. The stories and reminiscences started in different ways. George brought in a picture of his grandfather who was mentioned in a newspaper article as he was a famous engine driver who was featured on a cigarette card. We bought a set of the original cigarette cards for George and his family. 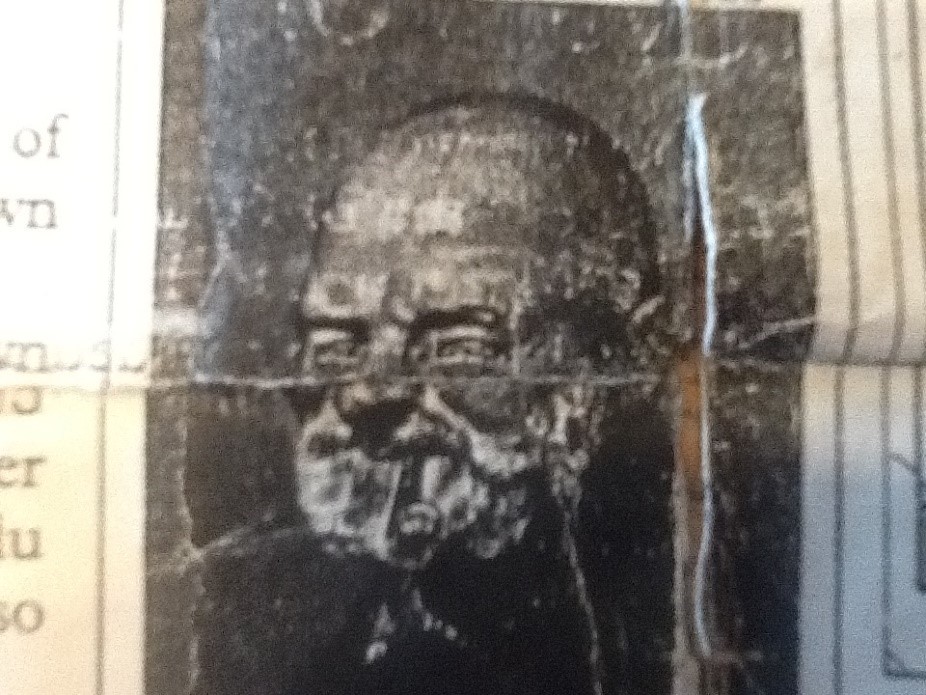 The club leader brought facsimiles of advertising leaflets from the forties and fifties including leaflets of men’s clothes, a Radio Rentals booklet and pictures of old cars to use in a quiz. These brought back many memories for Robert. 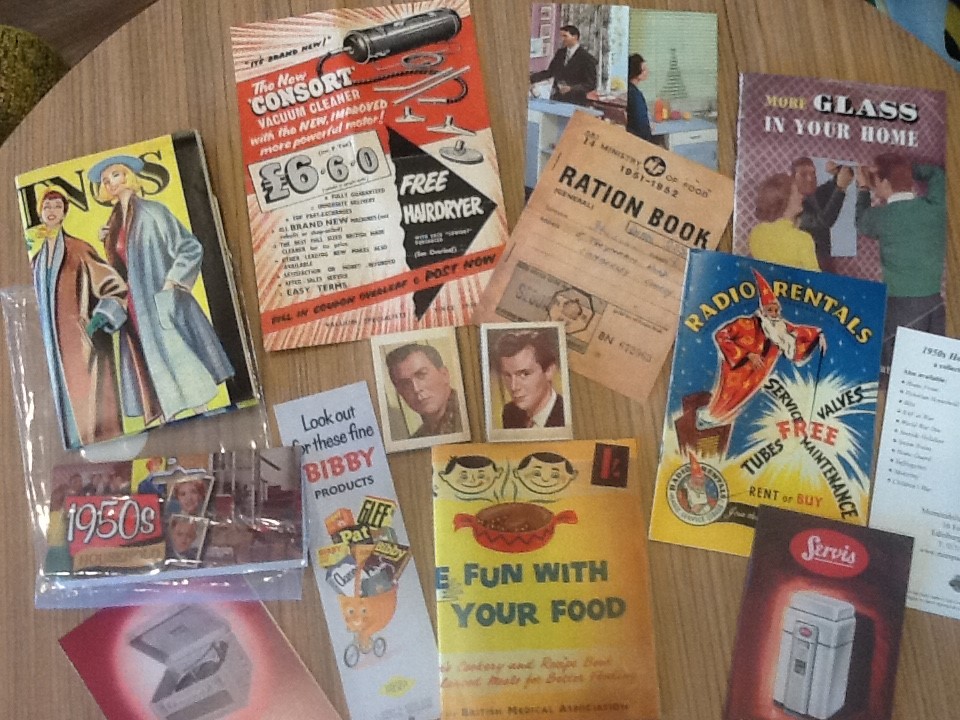 It was very difficult to find a starting point with Audrey. Her speech was hesitant and she often lost the thread of a subject, however she very much wanted to take part in the study. We did an activity in the club: what is your favourite food? and Audrey suddenly started talking about roast potatoes which had been cooked by her sisters. Gentle questioning and giving Audrey time to talk helped her to remember and tell her story.

All three had had their homes bombed in the war, and George and Robert had no photos from their youth. Audrey was the only one who had photos of her family and she used these. We used the internet on the iPad to find photos of places and items that they mentioned in their reminiscences, and used the screenshot facility to take copies of the webpages to use in the story.

Apart from Robert who had programmed early computers for his profession, none of the club members had used a computer or an iPad or had a mobile phone. They were all intrigued by the technology and enjoyed taking photos and immediately being able to look at them on the screen. There were some difficulties in training everyone to use the iPad; several kept holding down the camera button and took multiple pictures, while others had problems scrolling between the screens.

The three club members who took part in the study were fascinated by the ability to find pictures of places on the internet to use in their stories. George mentioned about the trams that used to go under the Thames and we found this picture. On seeing the picture, he laughed when he remembered he used to hang off the open tops of the trams. 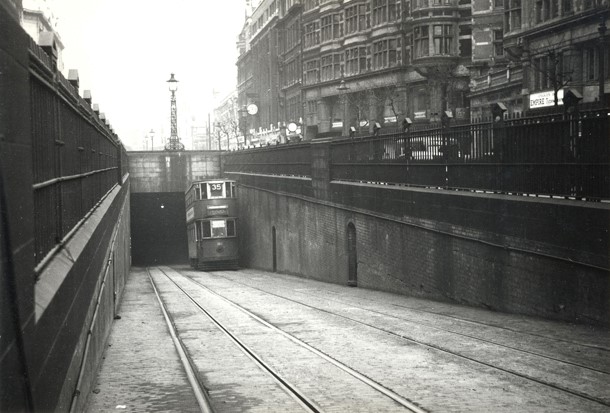 Recommendations for future studies with people with dementia:

The very nature of dementia suggests that long-term positive outcomes of the study may not be possible, however the people involved in the study very much enjoyed taking part in the study. One quote reflects how they felt (or this mix of feelings?), “It brings it all back, all those good times; it makes me go close to tears”.

Further information about this work

These activities have been written up by Dr. Valerie Critten and Professor Natalia Kucirkova for those who are interested in knowing more about the way Our Story was used.